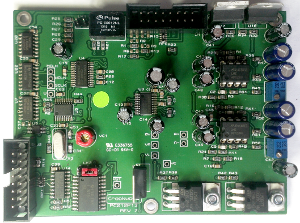 The Crookwood ADC card is a high performing, mastering quality ADC card, that can be fitted into any of our mastering consoles, or preamps.  It is a no frills design that takes balanced analogue in, and provides AES or SPDIF digital out.  Because all of our products already provide connectors, power supply and logic, the cost of the card is very low, ridiculously low in fact for the quality of conversion it provides.

There are many fine ADC s on the market, but to date our mastering clients have found this little card holds its own against other ADC s, old and new.  If you have got one of our mastering consoles, it’s certainly worth purchasing these DACs to improve the overall quality of your conversion.

How we do it

We’ve been designing ADC s since the mid nineties, and this is our 7th incarnation of our ADC.  You may not know it, but there are only a handful of semiconductor manufacturers who make decent ADC chips, so nearly all commercial pro audio ADC boxes on the market use chips from these few vendors.  What makes the difference in sound then is not really the actual analogue to digital conversion process, but the other, rather boring bits around the ADC chip.

The major factor with any converter is the quality of the clock at the ADC chip.  Any jitter on the clock used to sample the analogue is permanently imposed on the digital audio, and it’s impossible to remove these imperfections.  This is why the old advice of running all ADC s on internal clock exists. However in use this is often impractical, and you need to slave the ADC to a house wordclock to make sure the DAW behaves. Traditionally this was where a Phase Locked Loop ( PLL) was used, to derive a high frequency sample clock from the lower speed external wordclock. A PLL is a simple, well documented analogue bit of circuitry, but difficult to actually achieve in practice.  Until about 2003, this was the limiting factor in ADC performance.  However around 2003, several semiconductor factories started to make very good sample rate converter chips. Unlike the analogue PLL s, these were effectively digital signal processors (DSP) and by isolating the data clock from the precision ADC sample clock, they could do what a PLL did, but a whole lot better.

The net effect is that our ADC s sound the same irrespective of  whether you’re clocking the ADC internally, or externally via a super clock box or a normal DAW wordclock. Suddenly you can hear the music, and it’s consistent.  Result.  And you don’t need the expense of a super clock box or exotic cables, our ADC will sound the same with or without.

There has been some criticism in the use of SRC s, in that they are adding an additional digital process to the audio signal. This is true, however it’s also worth pointing out that the ADC chips also DSP the audio.  The SRC chip just does it better than the DSP s inside the ADC chips, and the combination of locally clocked ADC running a fixed high speed sample rate followed by a fast SRC, is very powerful, certainly better than a regular analogue PLL or VCO system.

After the clock recovery, the layout of the ADC is the most important factor.  You’ve got fragile analogue signals next to stupidly fast digital signals, power lines and clocks.  The only way to get it to work well is with good layout.

Our ADC cards are quite a lot larger than most – typically a competitor would get an 8 channel card in the size of our 2 channel card.  This is because we like space, and they like profit ( small size things are cheaper to make and ship).  All critical bits are kept well away from other parts, and in the world of physics, stuff attenuates in level with distance.  It’s this layout that gives us a huge advantage over other ADC s.

One interesting nugget is the concept of resolution.  Some recent ADC chips are 6dB quieter than ours.  It’s natural to think that they therefore will have 6dB more “resolution”, but it doesn’t work like that. They have 6dB less noise, so if you’re summing loads of channels you get an advantage, but for transferring or recording, what’s more important is what your noise floor sounds like.  With a good ADC, you can play and hear a sine wave, say at -20 or -30dB below the digital noise floor of the ADC.  It’s all to do with our ADC dither quality and the layout quality of the ADC.  Try it  with your DAW and one of our ADC s, you can hear the tone in the noise. This is all down to our layout, stopping digital rubbish from entering the digital audio noise floor.

This is why despite some advances in ADC technology, our 4 yr old ADC design still holds it’s own, and will continue to do so  – you can hear the audio in that there noise floor!

Most electronic engineers out there are trained in digital technology – it’s sexy, current, fast moving and it’s where the jobs are. Sadly before the SRC, an ADC is an analogue device, which a lot  of folk just don’t get.  Most commercial ADC s use analogue circuitry straight out of the semiconductor manufacturers data sheet.  They work fine, but if you know your analogue, they can work better.

Thankfully Crookwood are analogue engineers, who’ve learned digital, rather than the other way around, so our analogue circuitry is very good, and we pay proper attention to power supplies, clocks, passives and grounding.

The end result is a very competent ADC card. Each ADC card is fully self contained, not reliant on wobbly central power supplies or ground systems, or distributed clocks.  It has a clean noise floor, excellent accurate conversion, and is very affordable.