Everything sounds better in stereo!

We’ve all heard the term stereo, but what exactly is it?  The SoundBuckets allow you to listen to music in stereo, by joining two of them together.  However when you’ve only got one SoundBucket or any other speaker, you’ll be listening in Mono.  Here’s why.

Although we use the term “Stereo” to mean many things, including any speaker thing ( “nice stereo mate”), stereo , or “stereophonic sound” to give it it’s real name, actually refers to the way that the music was made, mixed and mastered.  Stereo signals need 2 speakers to play them properly, and Mono signals just need one speaker. Stereo was invented by British inventor Alan Blumlein  while working at EMI in the 1930’s but didn’t become widespread until the 1960’s.  Before that, everybody listened in Mono ( one speaker). Stereo is a really simple term, but actually hides quite a lot of technical stuff behind it to make it work well.

So what does stereo do?

Essentially stereo recordings allow you to create a 3D virtual soundstage in your room with 2 speakers.  By 3D, I mean that with good speakers, like the SoundBuckets, you can sonically place instruments or singers across a soundstage placed around the speakers, horizontally and vertically, and even in front or behind each other.  Cool hey?

Now most speakers will just present  a 1D soundstage ( instruments placed horizontally between the speakers) which is Ok, but if you have a speaker with excellent imaging properties like the SoundBucket, you’ll start to hear the full 3D.

If there is only one speaker, stereo signals can be easily converted to Mono to play them perfectly, but without any of the special positioning aspects. Conversely, if you put a mono signal into 2 speakers, you won’t get a stereo signal, just a mono signal, but twice as loud!

This 3D image is made in the recording process recording the music with level and phase information, and recording or adding reverberation to give a sense of depth.  The results vary hugely, but orchestral work is regularly recorded in stereo, with great realism.

Is everything made in stereo?

Yes, but we listen to mono mostly.  This is because it’s difficult for us to listen to a set of stereo speakers on the move – stereo only works if you sit and listen with speakers either side of you. So most  of the music played in hotels, supermarkets, off phones, docking stations, TVs, radios etc is all converted to, or is effectively mono.

Can you get stereo from a single speaker?

Err, no. Not really.  There are quite a few speakers that say they are stereo, and may indeed have two speakers inside them, but this does not a stereo system make!  Here’s the science bit: To create the soundstage, you need to hear different signals in each of your two ears.  To do this, you need a mixture of direct sound from the speaker, and at a later time and amplitude, coherent reflected sound from the room walls, floors, ceiling etc.  This can only really happen if the distance between the speakers is about the same distance as the speakers to you. So if you’re 6 feet away, the speakers need to be about 6 feet apart.  Computer monitors need to be about 50-60cm apart and so on.

From this you can see that a single box system isn’t going to cut it.  To overcome this, it’s popular to introduce some audio processing to simulate stereo effects, and widen the soundstage from a narrow speaker.  This certainly sounds different, but it’s an effect, not real, and uses psychoacoustics to  fool your brain.  It can sort of work sometimes, but often not. Generally good mono sounds better than poor stereo.

Recently the Bluetooth chips have enabled manufacturers to offer Bluetooth stereo ( CSR’s True Stereo).  This is fitted to the SoundBuckets. This works quite well for casual listening, but isn’t up to critical standards.  This is because Bluetooth can’t send data to two speakers at once, so it sends the data to one speaker, which then retransmits it to the other one. The net effect is that there is a delay between the sound coming from the left and the right speaker.  Although small, this delay will damage the soundstage, so you won’t get the best imaging.  The SoundBuckets however have a cunning second option: they have a zero latency analogue aux output.  This means you can stream stereo to one speaker, and link the other speaker up with an aux lead.  You can then tell the SoundBuckets which one is left and which one is right, and hey presto, perfect no latency wireless stereo!  You can use the same trick if you want to feed the SoundBuckets with analogue signals, rather than wirelessly.

I’ve written some tips on how to set up stereo speaker in a separate tip, available here.  Enjoy!

SoundBuckets are available at great discounts on Kickstarter until 15th July. 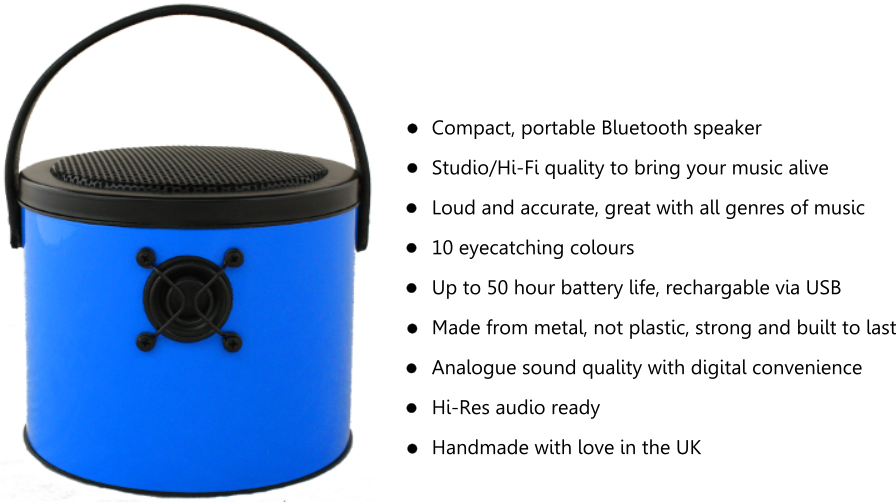